The William Henry Seward Papers is the largest and most frequently cited manuscript collection in University of Rochester’s Rare Books, Special Collections, and Preservation Department (RBSCP). Uniquely, it also contains a complete family manuscript collection that spans roughly a century from 1817 (when his then future wife, Frances and William Henry were teenagers) to 1920 (the death of William Henry Seward, Jr., heir to the Seward house and the last survivor of his generation). A few items reach back to the eighteenth century and a few items are more contemporary— up through 1950, when the collection was donated to the University. It includes roughly 230 linear feet, 150,000 items, 350,000 pages of personal and family letters, photographs, diaries, journals, family and business account books, business records, scrapbooks, commonplace books, legal papers, diplomatic correspondence, political correspondence, and other public and private documents, pamphlets, books, and memorabilia. A pamphlet collection of over 3600 items and about 500 books from the family’s library are included in this count. There are 4,496 bound items in addition to the pamphlets.

The depth and breadth of the Seward Papers, with its large number of pamphlets, broadsides, and other ephemeral materials rarely seen in such numbers in an archival collection of this period, has long attracted the attention of scholars from around the world, and has made it UR’s most prized collection. It offers students and researchers the rare opportunity to examine, often through firsthand accounts, the central issues and topics of the nineteenth century that shaped the identity of America: abolitionism, the Underground Railroad, states’ rights, universal suffrage, prison reform, the insanity defense, public education, homeopathy, friendship, readership and literary taste, phrenology, religion and spirituality, and freedom of expression, among others. Our ultimate goal for the Project is to identify, catalog, and organize manuscripts bearing on the lives of the family of William Henry and Frances Miller Seward from the five collections (Seward, Miller, Grier, Chesebro, and Thurlow Weed) located at UR in the River Campus Libraries, the manuscripts found in the SHM, and those held by descendants (principally Ray Messenger of Auburn, NY, who has also helped us search for other manuscripts held by descendants).

We have digitized manuscripts, transcribed and annotated letters, and tagged them in TEI for display on this public website. All material is searchable across the entire corpus of material that comprises the Seward Family Digital Archive. We are publishing the digital archive and the digital humanities pedagogy created for the university classes associated with the Project. The documentary edition and our pedagogical model, both Project products, will help facilitate other projects of this kind that bring together citizen archivists across institutions and generations. 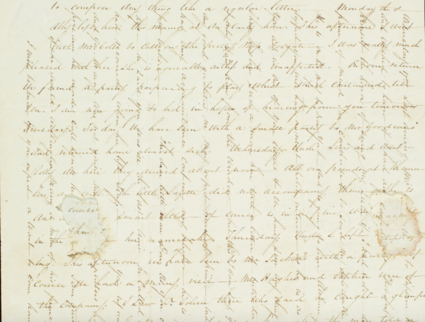 A cross-hatched letter from Lazette Miller Warden to her sister, Frances Miller Seward written on July 7, 1822.

The Project team led by Project Director Thomas P. Slaughter, Arthur R. Miller Professor of History, trains undergraduates, graduate students, and retired volunteers as historians, documentary editors, and archivists whose work is driven by research questions about the relationship between public and private life. The Project trains students and volunteers in archival practices, such as cataloging collections and working across collections, and developing finding aids for collections as they are physically organized and as they are digitally represented and preserved. Students and volunteers are trained as historical editors to the standards of the National Historical Publications and Records Commission (NHPRC) and Association for Documentary Editing (ADE), in digitization and the creation of metadata, in TEI to its P5 standards, in web design and development, using Drupal forms both to produce a major born-digital archive and to teach successive generations of students and volunteers the skills necessary to sustain this project and to embark on others. The team sees the public dissemination of the documentary edition and this pedagogical model for experiential learning and community-engaged teaching in the digital humanities as co-equal, mutually supportive products and accomplishments.